If you’re an investor, you’ve likely heard buzz about the possible consolidation of budget suit retailers Jos. A. Bank and Men’s Wearhouse. Mergers, acquisitions, and bankruptcies have little to do with the usual topics on the Brain Juice blog, but I feel the health of the suit industry does.

In last night’s Marketplace segment, the cited primary driver for the budget suit industry being in decline was the diminishing middle class. In fact, the middle class has seen a 25% reduction since 1970: 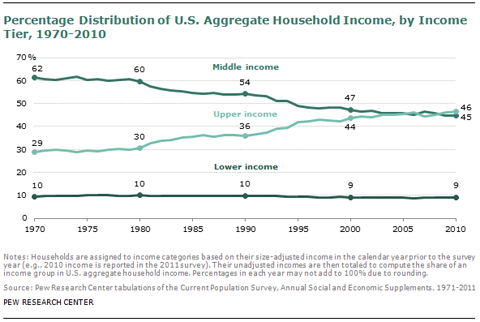 While I won’t deny that has some relevant impact on the number of suits being sold, I’ll hypothesize it is one of the most minor of drivers in this shift. What the chart above fails to note is that US population has grown by more than 50% since 1970, offsetting the decline in percentage with an increase in middle class workers.

A more telling chart is that of the increase in technology jobs, increase in online consumerism, or even this graph of the number of computer science related degrees: 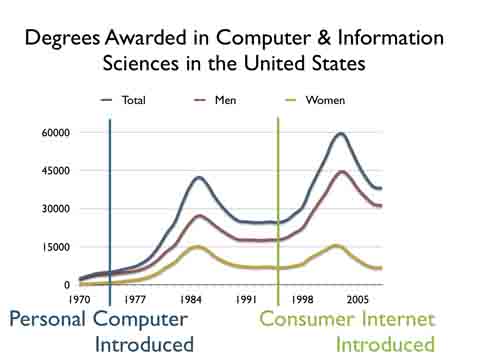 That chart shows two peaks, following the introduction of the personal computer, then the introduction of the internet. We are in a third peak right now, following the rise of mobile devices and social media, with a 30% bump in computer science degree enrollments in 2012. In other words, since 1970, there have been a ton of computer science professionals entering the workforce every year and that number keeps growing.

Perhaps it’s causality, but it seems the rise of the technology industry is much more to blame for our reduced reliance upon suits. The business to consumer relationship of Mad Men era agencies and sales relied upon face-to-face interactions on doorsteps, in storefronts, on sidewalks, and with physical handshakes. The business suit, in many ways, was critical to professional success and considered an investment. Today, our mobile devices and social media channels are our smiles, slicked hair, buttoned-up brand, and digital handshake. We’ve traded runners and briefcases for today’s lovable geek and their toys that make our customers swoon: 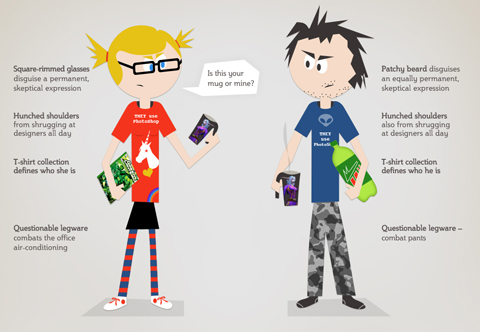 Is any of this bad? Not from my perspective. Unfortunately for the Jos. A. Bank and Men’s Wearhouse businesses of the world, suits are in decline. They won’t go the way of Blockbuster or Best Buy, but the suit will re-emerge as a fashion novelty for the dapper gentleman/gentlewoman (see the wristwatch) rather than acting as a catalyst for success in the consumer marketplace. Instead, businesses and professionals will continue to clamber to stand out as taller, shinier, and sharper in the increasingly congested digital neighborhood that is the Internet. Brands, suit up!