The age of the designer in a task chair will have effectively rolled out the door, into obsolescence. Ludicrous? Science fiction, even? Let’s review the trend… 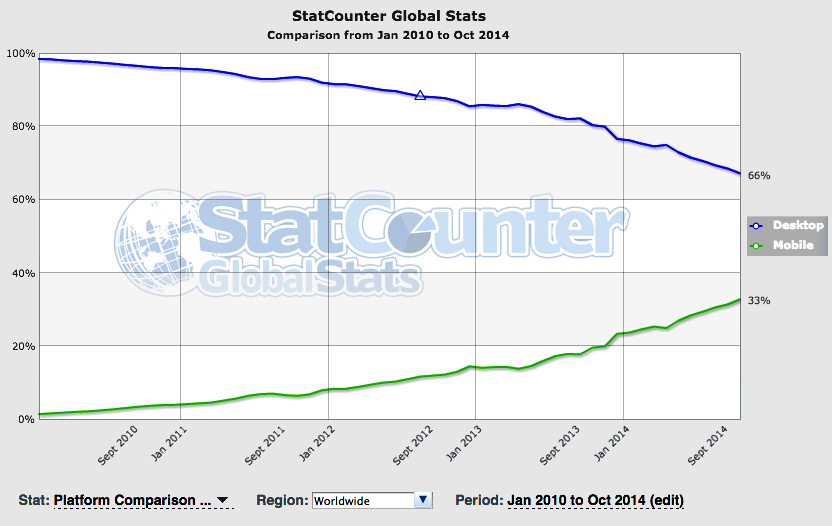 In 2010, just five years ago, we were slowly adopting our smartphones. Most of our clients didn’t own one yet. BlackBerry was still king of the business world. As web designers and developers, we were a religious bunch—reading Ethan Marcotte’s Responsive Web Design (2010) and soon after, Luke Wroblewski’s Mobile First (2011)—but that newfound knowledge was a hard sell among tight client budgets. The mobile consumer hadn’t amassed yet, and finance departments weren’t signing the dotted line to design for two screens, let alone everything in between.

Today, the figures speak for themselves and responsive is the barrier to entry. This month, StatCounter revealed worldwide mobile Internet traffic has surpassed 33% on a trajectory that isn’t slowing. Personal computer sales plateaued in 2010 (Jun 2013, USAToday) and budget smartphones are increasingly being introduced to new consumer majorities. If we extend that StatCounter graph (below), we’ll have reached a 50/50 traffic split by the end of 2015, and a complete inverse of the graph before 2020.

Desktop versus Mobile Traffic, extended through 2020

These numbers reek of hypothetical, but you’re likely reading this post from a Western culture, where US census data (e.g.) reveals we own more personal computers than we have citizens. That’s greater than a 100% saturation rate, in addition to our smartphones. Compare that to the larger economies, China and India, where saturation never reached a 17% average and smartphones are only beginning to be price-accessible.

With today’s total Internet users totaling a mere 40% of world population at 3 billion, Asian influence on the Internet marketplace is only beginning.

In 2011, Xiaomi was introduced to China as a budget smartphone, not so subtly copying many aspects of the Apple brand. By 2012, China’s mobile Internet usage surpassed its computer traffic. (Aug 2012, TechInAsia) In 2014 the manufacturer leapt over competitors Huawei, Lenovo, and LG to become the third-largest smartphone manufacturer behind Samsung and Apple—selling 17 million units in the third quarter. (Nov 2014, PCWorld)

By the end of 2015, Xiaomi will have sold more smartphone units in China than the US has total smartphone owners. (Jul 2014, TechCrunch)

The introduction of Xiaomi is sweeping China, putting the smartphone (and the Internet) into the hands of billions of previously untapped consumers. Additionally, Xiaomi plans expansion into similar markets like India, the world’s second largest population pool. Combined, India and China comprise more than 36.5% of the world population, with 2.2 billion consumers who have never owned a personal computer before—a mobile-only population eclipsing the entire US by seven.

This mobile-only trend doesn’t end in “the East.” The US reached 50% smartphone saturation in 2014. More than 40% of Hispanic Millennials are mobile-only. (Jun 2014, comScore) Worldwide, there are already 400 million Facebook users who only log into their accounts on mobile devices. (Jul 2014, TNW) That 50/50 split in 2015 is all but guaranteed, and the hypothetical “mobile-only” climate of 2020 is wagerable.

Birth of the mobile-only designer

As China, India, and following markets become smartphone-enabled, and as the US and other Western cultures continue to decline in personal computer usage, a new breed of design “agency” will appear. Tomorrow’s entrepreneurial 16-year-old web designer will make a career of designing, developing, and launching websites from their phone or other hyper-portable device, without having touched a traditional personal computer. Gone will be today’s hive of desks.

This shift won’t come because those devices are inconvenient, or even expensive. This shift will come via demand. Just as we had to arm-twist in 2010 to convince clients they needed a mobile site to deliver content, we will be attempting that same twist to save the art of desktop-sized designs for an ever-shrinking consumer base. In markets where personal computers never existed, where bootstrapped designers have never used a device that didn’t fit into their pocket, there will be no need to design “up” because smartphones are the ceiling that matters.

It’s mildly scary where we’re headed—we the affluent designers with dual-monitor standing desks and Wacoms. Design for the desktop will still exist for productivity systems—hospital displays, projected war-room analytics, and the like. But for the rest of the world—the billions of small businesses catering to the average consumer, and the design agencies that cater to those small businesses—2015 will be a year of change. My Apple IIe mental model is shaken, and by embracing my beginner’s mind, a new foundation is hastily being lain.

I hope you’re as excited as I am!

This is Part 1 of a two-part article. In Part 2, I’ll demonstrate how to design, develop, and launch a brand new mobile-only website from your phone—without access to a personal computer.