With three related meetups going, we were getting a lot of traffic and cross-pollination of members. There was also no shortage of sponsorship for food and beverages—though we were typically, BYO. Pizza is common fare for a meetup, just because it’s easy and doesn’t require too much in the way of incidentals like plasticware.

Over the next few years, I kept guessing at the number of pizzas we needed based on the number of RSVPs. Then, in weak effort to be more accurate with each order, I tracked leftovers. As a general practice, we took head counts and calculated regular percentages of attrition (RSVPs to actual attendees).

In 2012 or so, after being left with a dozen too many pizzas at an event, I sat down to crunch two years’ worth of trend data. It turns out, there were a couple of conflicting graphs observed:

Now, I have theories about why these trends are the case, just based on social norms:

If I had an abundance of time on my hands, it would be fun to dive more deeply into the study of social pizza-eating, but instead I addressed the problem by coming up with the following algorithm:

The first calculates the number of actual attendees based on RSVP count. It says if there are 10 or less RSVPs, we’ll likely get 100% attendance. Anything above 10 will be a gradient closer to 80% as your event gets larger.

In tandem, they form the Meetup Pizza Calculator I’ve found to be fairly accurate—or at least much more so than guessing or assuming the false two slices per person. 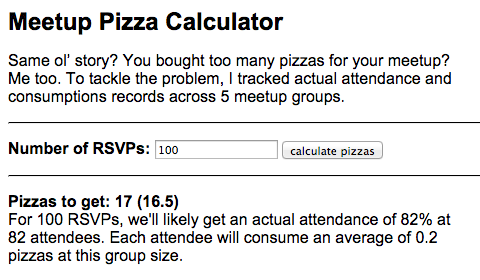 There’s a disclaimer on the calculator, but I’ll repeat it here. The calculator assumes a lot of constants like: working professional adults, on a weeknight, at around the same time in the evening, with average-size large pizzas, etc. We’ve observed radical numbers when the weather is particularly bad, for example.

Other than that, if you’re organizing an evening office party, this might be useful to you. Also, I tried to be funny and hide Easter eggs in the numbers—but it’s geek humor. Just because I snort doesn’t mean you will. ;)